Home > Blog > The Stardust ARC: a story about a story….

The Stardust ARC: a story about a story….

There’s a rather nice book that we can’t seem to get rid of. It’s on a strange razor’s edge, both coveted and relinquished, welcomed and pushed away…and strangely enough, writing its own story year after year. We’re talking about an extremely rare, signed & numbered ARC that comes in a slipcase. ARCs are often printed before publication to send to reviewers who might promote the book. They aren’t printed in large quantities, and they often contain errors that will be corrected before the book actually comes out. They certainly aren’t given the Cadillac treatment of having their own slipcase and being signed and numbered by the author.

But that’s what we got. Is it the most rare book we’ve seen? No, but only barely. Is it the most high-profile book? Probably not. But it’s from a well-known author, and at this point, the story it has woven throughout the Worldbuilders fundraiser is almost more important, if for no other reason than that this story is filled with wonderful folks who prove our assertion that people are, at their core, good.

Curl up, then, while we tell you the story of the Stardust ARC…

Pat started a fundraiser for Heifer International just to see if he could raise some money. He ran it through his blog, working out of his living room, and he figured he’d maybe raise a few thousand dollars if he was lucky.

Well, word spread, people got really excited at the idea of donating, and a bunch of other authors sent in their own books to beef up Pat’s lottery library. It was hectic, but really cool. And then Neil Gaiman noticed Pat’s fundraiser and told his fans to maybe check it out, and everything exploded. The fundraiser was a bona fide thing. And Neil even donated a book of his own to the lottery….which was caught up in the mail too long and didn’t arrive in time. 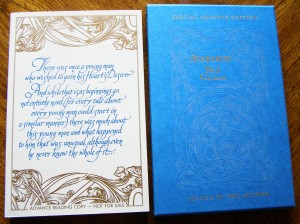 The next year, Worldbuilders was still just Pat and a few of his friends running a crazy fundraiser. But now they had street cred–and a ridiculously rare, signed ARC of Neil Gaiman’s delightful fairytale, Stardust. They could auction it off and raise a bunch of money. But that would make it completely out of reach for someone who didn’t have that sort of money to throw around. Pat decided that something this cool needed to be available to anyone, and this beautiful collector’s item was put in the lottery. Anyone donating $10 to Heifer International had the chance to win it.

And win it someone did! And that’s when the legend started taking shape: the winner donated it back. While they were happy to win such an awesome book, they said it really should be auctioned off so it could raise even more money for Heifer. And, technically, this person was now the donor, and Pat had to follow their wishes.

So the next year, the Stardust ARC went up for auction.

Worldbuilders was getting bigger, and Pat just couldn’t keep up with the outpouring of donations and support. We had a bunch of donations from authors and publishers to put in the lottery, we had rare & signed books from authors who brought in their own fans to spread the love, and we also had this extremely rare Stardust ARC safely tucked on a shelf.

So, along with a few other collectibles, the Stardust ARC went up for auction on eBay. We watched every day as the bidding climbed to crazy heights, and the auction finally ended at $2,500. That’s a lot of goats, and we were over the moon at how much just one book was able to raise for Heifer.

Pat emailed Dan, the auction winner, to congratulate him and arrange shipping, and Dan told Pat he was donating it back to Worldbuilders. Now, it’s not often Pat’s left speechless, but he genuinely couldn’t find words. He tried to talk Dan out of it. Dan said he wasn’t changing his mind–he’d been inspired by what happened the previous year.

Dan’s mom was a hardcore geek, like the rest of us. She was into fantasy and science-fiction, and she played video games. She also supported charity, even when she didn’t have much money to spare. Dan had an awesome mom. Unfortunately, Dan’s mom had recently passed away, and he used most of the money she left him to win the Stardust auction, because that would have done her proud.

And Dan said everyone should have a chance to own the Stardust ARC, so it went back on the shelf until next year. 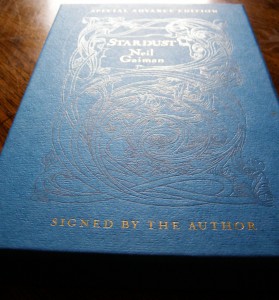 The fourth Worldbuilders fundraiser launched with Neil’s Stardust ARC in the lottery for anyone to win, thanks to Dan’s generosity. As we talked glowingly about all the folks involved in this strange anomaly of Stardust-go-round, people started to spread the word.

At the end of the fundraiser, we drew names for the lottery winners, wondering who the lucky Stardust winner would be. We hoped it was finally going to a good home. So Pat called up lottery-winner Maayan to ask if she was ready to have a rare book delivered to her, and she said nope. As much as she would love to have it (and she would), this copy of Stardust was now bigger than the lottery. It needed to stay in the fundraiser.

Pat thanked her, mystified, and sent her a box of books anyway, just for being awesome. We thought things couldn’t possibly get weirder, but they did. 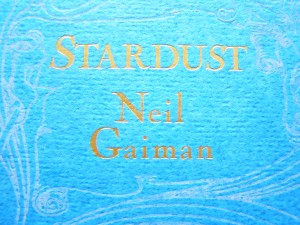 The 2012 fundraiser launched with a legitimate staff, a bigger lottery than ever, and the return of the Stardust ARC.

When we wrapped up and started pulling names–using a randomized spreadsheet this year, because science–Amanda got that look on her face like reality might be tearing a little at the seams. We told Pat who the winner of the Stardust ARC was, and he agreed with Amanda. Something was wrong. We messed up somehow. But we double-checked everything, and sure enough: Maayan won again.

So Pat called her. It was a bizarre conversation filled with all of the emotions, and she agreed that maybe she might actually need this book, since it obviously needed her. We sent it to her. 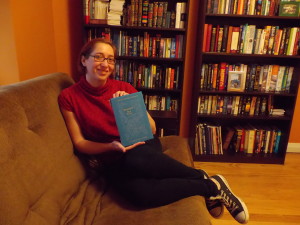 She had this to say…

I was really extremely surprised to win the Stardust ARC two years ago, because I don’t think I’ve ever won any kind of online contest before. I was actually sitting in a hot tub on a ski trip to Colorado when Pat called, and my friends got to watch me make the craziest faces while on the phone. A few weeks later, Neil Gaiman sent me a little card with a picture he had drawn in it, which was so nice of him.

When Pat called me this year to say that I had won again, I’m pretty sure my first words were, “No, I did not!” Surprised doesn’t begin to describe it. If I win again this year, I’m going to start to be suspicious of your randomization algorithm.

Worldbuilders is such a great fundraiser, and Heifer International is an outstanding organization. I’m thrilled to take part. Thank you to Pat Rothfuss for putting it together, and thank you to all of the authors and artists who donate the prizes! I’ve enjoyed reading the fruits of your generosity.

Then Maayan sent it back to us again, because she’s awesome.

2013 – Stardust is now an Official Thing

The next year, Jennifer won the Stardust ARC. She was super happy to win it, and declared that she would still return it for the next year’s lottery. Someone in the office said it was like we were a library that kept lending the same book over and over, and that spawned the Best Idea Ever: We made library cards for the Stardust ARC, complete with a Dewey Decimal classifier, because we’re geeks. 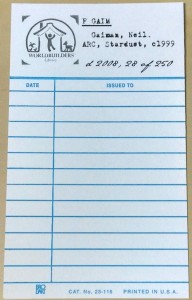 We asked Neil if he would be willing to sign them as the first person to have the book, and he was. 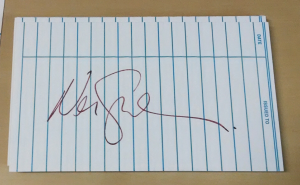 After Neil sent the signed cards back, we mailed them out to the previous winners, who signed all of them, keeping one for themselves. Maayan, of course, got two of them. 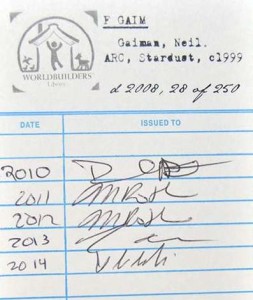 We figured it was a fun way for people to mark the occasion–they get a physical chunk of the Stardust ARC story to add to their library.

Our 2014 Stardust winner was Jeff, who turned right around and donated it back to us. We sent him some cool books, and of course, his Library Card. Here’s how he let us know he got it: 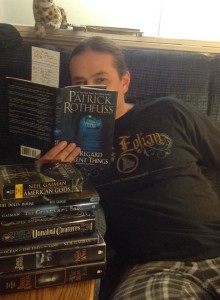 We love our supporters so much. You guys are the best.

In 2015, Amanda called Don to tell him he won. They talked for a while, and he was very cool, and very insistent that we hang onto the Stardust ARC to include in next year’s lottery for someone else. So of course we sent him a box of stuff and some library cards to sign.

And Stardust went back into the lottery for the seventh time. …but you know, with books instead of narcotics. Though, one could argue for the addictive properties of books.

Anyway, last year Lucas won the Stardust ARC in the lottery. He was wonderful, and our first international Stardust winner! There was much emailing and a phone call to France. The Stardust legend was officially intercontinental. And to continue the legend, Lucas donated it right back to us for this year’s lottery.

Of course, we sent him a box full of books, including the French editions of a couple of books in The Tinker’s Packs, and of course, library cards to sign.

He has his library card to mark this occasion, and we added the Stardust ARC back into the lottery. That brings us to this year! Once again, the Stardust ARC that Neil donated almost 10 years ago is in our lottery, ready to pick a new owner in a long, distinguished line of amazing people. Every $10 you donate gets you a chance to win it, and we really can’t wait to see who wins this year.

Thank you, everyone, for joining us!